... the aircraft that changed the course of a war. 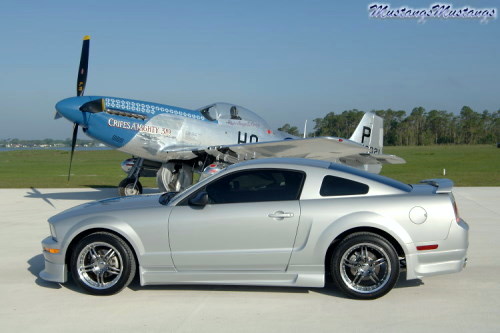 
Yes, the North American P-51 Mustang and the Ford Mustang do look good together. But, is there more to that? During the evolution of the Ford Mustang, promoters were looking at several names for the new affordable "sports" car. Some of the names considered were Cheetah, Puma, Thunderbird II, Cougar, Colt, Special Falcon, Torino, and Mustang. Some of these names survived to be placed on other Ford cars.

They chose the Mustang because of the success and popularity of the North American Aviation World War II fighter. The Ford marketing department was correct. Buyers flocked to the Ford dealers to take a test drive, and thousands grabbed up the Mustang.